The Thoroughbroads met at J.J.’s home in one of the newer subdivisions in the east end of Louisville for a monthly luncheon. The drive was worth it as we passed rolling Kentucky hills and little commercial construction. We always laughed at the “Louisville mindset”…if it is more than a few stoplights; you’re headed to the country. Most of us had lived in cities where you might sit for 20 minutes trying to make a left turn on to a well traveled street and since J.J.’s house was 20 minutes out of downtown…she was in the country of “the Ville”.

The back of her home was open to a lovely screened in porch with scenery of trees and peaceful privacy not heard of in most subdivisions. Developers usually sell off every square inch of land for housing and don’t leave the natural beauty of the land. This was an exception. Open and airy inside with lots of windows allowed Mother Nature to show off her wares. The décor was simple with a no clutter look giving it a clean orderly feel. Since she had moved many times with her husband’s career, they had not accumulated a great deal of things and it was refreshing. I believe she was ahead of her time in many ways as today we try to simplify our abodes, we eat healthier, and we exercise more and are a great deal more comfy casual in our dress and décor. It seems J. J. was spot on with this lifestyle long before it became a smart way to live for the rest of us.

We gathered in the kitchen to enjoy a Blue Cheese Spread on toast points with a sparkling white apple wine spritzer and to catch up on what we all had been up to since we saw each other last. We proceeded to the screened porch for lunch. The birds were all about outside and it was one of those slightly cool spring days that made you breathe in the beauty of the upcoming season. This was the first day you could wear that light weight top you had bought at the end of spring last year and it still fit after a hibernating winter. You could pull on those comfortable open toed flats and a pair of twill pants…jeans had not become high fashion with our age bracket in Louisville yet. “The Perfect Fit” Gloria Vanderbilt  designer dark denim jean (with the embroidered swan on the back pocket) came out in 1976. It would be a few more years before you saw the swan on the backsides of many Louisville housewives.

Since the holiday season had just passed, the talk was all about other new fashionable items, such as the “Tennis Bracelet”. In fact, a few of the girl’s showed off their new diamond bracelet Santa had brought them. (Chris Evert, women’s tennis champion, lost a diamond bracelet during a match in the 1987 US Open. Evert asked officials to postpone her match until the bracelet had been found. This sparked the desire for a bracelet like her’s with diamonds in it.) Funny how the only one in our group who played tennis was our hostess and she did not have one. Scarlett noticed the new accessory on some of the girls right off and mentioned that she had diamond news to share. 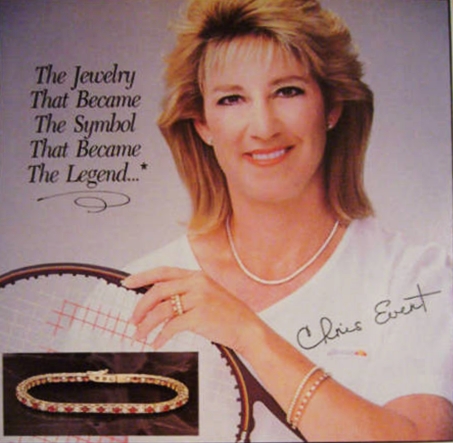 A gal pal of our’s  from Newcomers Club recently had a couple’s brunch at her home and Scarlett had attended. Scarlett bragged about eating asparagus for the first time in a strawberry and roasted asparagus salad with lime poppy seed dressing. Down South… it was boiled and nasty stuff, so she never ate it, but she had loved it served this way. While the hostess set the dish on the table, Scarlett noticed a new 5 carat square cut diamond ring on Lori’s wedding finger. As she grabbed Lori’s hand, she showed how much she loved it and why had she not seen it before. It was huge and absolutely beautiful.  Lori whispered that she had gotten it for Christmas and was it too ostentatious? Lori was one of the sweetest girls we all knew, she held down the fort while her husband worked out of town a great deal, she was the step mom to a precious little boy, volunteered at many of the Louisville fundraising events and generally one of the best people you could ever meet. Scarlett told her that if anyone deserved that diamond she did and to wear it proudly. Lori hugged her and felt vindicated and confident to wear it in style.

All of the Thoroughbroads were genuinely happy for her and wanted to know all about the ring, how to make the asparagus strawberry salad, the details on the day. There was not a jealous bone in the group and that is why the group stayed together for years. Diamonds are great but showing true friendship for one another is the best gift of all.

Mix all together in a food processor. Better if made a couple of days ahead so flavors marry.

Serve as a spread on toast points or quality crackers

Take asparagus and drizzle with olive oil, salt and cracked pepper and grill or roast until slightly limp and colorful.

Arrange spinach on a flat platter as a base with grilled or roasted asparagus in the center, arrange strawberry slices around the asparagus and pour Lime Poppy Seed Dressing over the top.

Beat honey mixture with electric beater on medium high while gradually adding ¼ cup salad oil and continue until thickened. Cover and chill slightly. Stir and then poor over salad for serving. Makes ¾ cup.